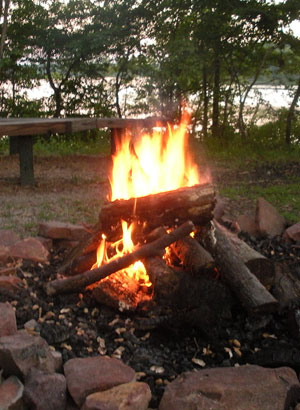 The fire pit in the Rev. David McNabb Worship Center.
﻿ 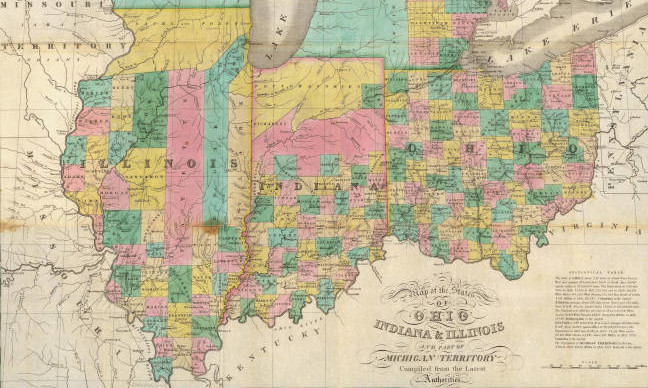 Rev. John E. Finley, a Presbyterian minister from Chester County, Penn., to Mason County, Ky., coveted the privilege of being the first to plant the Church of Christ upon the territory of the future great State of Illinois; and also in the Louisiana Territory, in what is now the state of Missouri. In 1797, Mr. Finley descended the Ohio River in a keel-boat, with several of his neighbors, members of the Presbyterian Church, and ascended the Mississippi, and landed at Kaskaskia, with the bold design of planting the standard of the Cross in the Spanish Colonies west of the Mississippi River. Mr. Finley probably had ultimate reference to a mission among the Indians. He preached the Gospel, catechised and baptised several of the "red men." But, in short time, he was led to abandon the enterprise. . . . During the years 1810, 1811, and also in 1814 and 1816, Rev. James McGrady spent a considerable time in the southern counties of Indian[a] and in Illinois, and in 1816, or some accounts say, in 1814, Mr. McGrady organized Sharon Church in White County. This was the first Presbyterian Church in Illinois, and its honored name still stands on the rolls of the Presbyery of Cairo.

After years of missionary work from itinerant clergy from other presbyteries, The Synod of Indiana established a new presbytery for all of the state of Illinois on October 16, 1828. It was named the "Center Presbytery of Illinois." It consisted of seven ministers and 21 churches. The first presbytery assembly was scheduled for January 1829 in Kaskaskia. 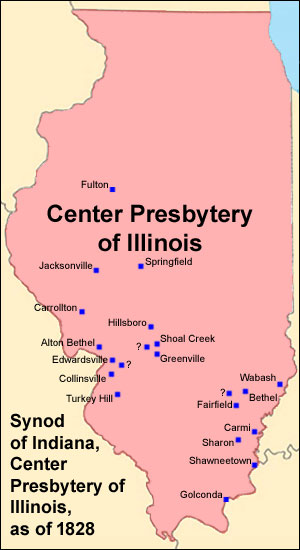 The Center Presbytery of Illinois in 1828 showing its 21 congregations (adapted from William Irvine Blair. The Presbyterian Synods of Illinois. Page 16. Mattoon Presbytery, 1952. Web.)

The History of Camp Carew

The Presbyteries of Cairo and Ewing met in 1951 and approved the camp site development program.

The renewable lease was signed in 1952 with the Fish and Wildlife Service of the United States Department of the Interior. Goals were set and plans made for the camp.

In 1953 estimates of building sites and prices were made, then work camps were held.

The name of the camp, CAREW, was coined from the two presbyteries—CAiRo and EWing and adopted early in 1954.

Work continued on buildings and plans were made for a bridge. The dining hall was finished in 1956.

The toilet, showers, and laundry were built in 1957.

Report of the Camping Taskforce to the Presbytery Life Committee of the Presbytery of Southeastern Illinois dated December 20, 1984, and revised March 28, 1985. Page 7. Photocopy of the report with attachments from the PSEI General Council meeting. 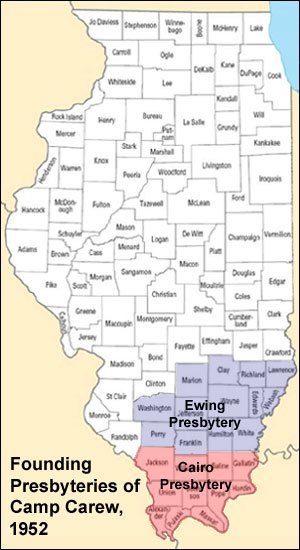 Over time, there were numerous changes in the boundaries and names of the presbyteries within the Synod of Illinois. In 1971-72, the General Assembly of the United Presbyterian Church in the U.S.A. (UPCUSA) approved a major denominational re-organization which created large regional synods and necessitated the creation of large, sustainable, presbyteries. The Synod of Illinois and the Synod of Indiana were merged into the Synod of Lincoln Trails. 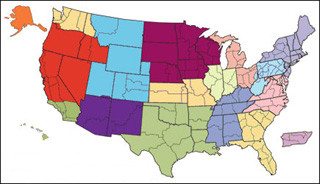 The Synods and Presbyteries of the PC(USA)

The presbyteries of the Synod of Lincoln Trails are:

In 1884, an Assumption, Illinois-area farmer, Philip Kemmerer sat down and wrote out his own will--his gift to the children of the future! He wrote that his 400-acre farm and assets were to be given to the Presbyterian Churches of Central Illinois to create a home "for the orphans and friendless poor of all denominations."

Nine years after the death of Philip Kemmerer, the doors of Kemmerer Orphan’s Home opened wide to welcome homeless children, thus putting a plan of action together to fulfill one man’s dream and vision to help the helpless!

The Home served as a safe haven for orphaned children and also as an adoption agency. At that time, it was the Church’s responsibility, to care for the needy, the poor, and the orphaned. Most of the children were pre-school and grade-school age and all lived on the second floor of the old main building. There were usually 15 children living in each of the two dormitory rooms.

As modern medicine began to help childbearing couples live longer, the role and responsibility of the religious children’s homes began to shift away from caring primarily for orphans, to that of children of divorce, children born out-of-wedlock, or those of financially stressed families. During this time, the cost of caring for children continued to rise and soon the Church could no longer afford the sole responsibility of financing the cost of care for the needy. Governmental assistance, through taxation, began to assist churches with caring for the needy, the poor, and the hurting. Children often stayed at Kemmerer for five to ten years.

In 1954, Kemmerer Village began a new and radical program of providing small family-like, ranch-style cottages each with ten to twelve children, rather than being all housed in two large dormitories on the second floor of the main building. During the next 20 years, a gymnasium and ranch-style cottages were constructed on the 20-acre campus. Live-in houseparents served in each cottage. During this time, several county courts, who shared the welfare responsibilities of the needy, referred the majority of children to Kemmerer.

In the 1980's Kemmerer Village once again experienced a change in the type of children needing its care. No longer were the children orphans or children who were simply products of family breakdowns and needing long-term custodial care. These children were often victims of physical abuse, desertion, sexual abuse, neglect, and family and community violence. These children had challenging behavior problems, school problems, low self-esteem, anger, suicidal tendencies, and a pronounced distrust of adults.

Camp Carew welcomes campers from all religious traditions.
Camp Carew is a drug- and alcohol-free environment.
Camp Carew complies with the American Camp Association and the CDC guidelines as they pertain to Camp Carew.